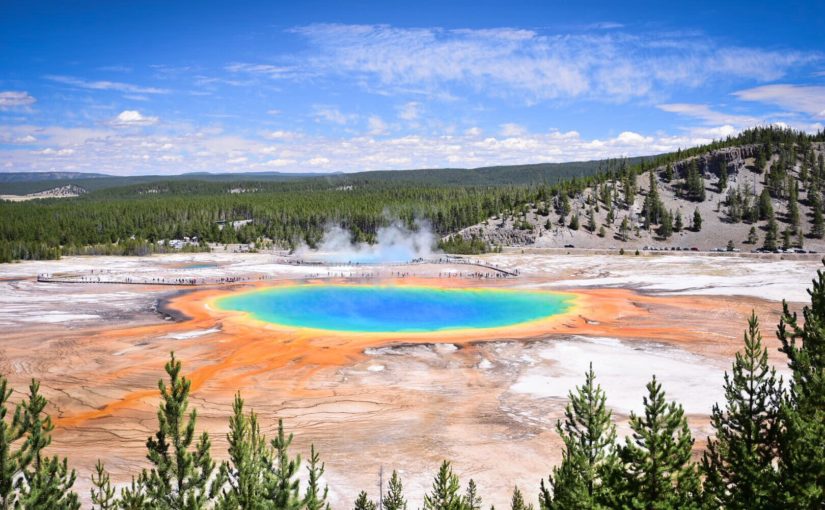 We both woke up for our own reasons around 5am this morning. (You can probably guess what they were.) My pad was deflated again, so I did something about that when Becky got up. Sadly for me, I was too warm in the cold, and sweat so much that I think it saved me an earlier trip to the restroom. Sadly for Becky, she did not stay comfortably warm despite her best efforts. Becky tried to catch some more Zs while I tried to catch up on my writing since I knew it was unlikely I’d fall asleep again.

At 6am we were both awake and I asked Becky if she was up for getting out early to beat the crowds. She said OK, so by 6:30 we were on our way to Norris Geyser Basin. The entire drive was foggy and mysterious, mainly because of the cold morning air and all of the hot steamy water in the park. We couldn’t see very far ahead of us in Gibbon Meadows and the entire Norris area was shrouded in fog.

Norris Geyser Basin is one of the most popular attractions in the park, and it has extremely limited parking (as do most things in Yellowstone). We definitely made the right move coming early, since we snagged the very closest parking space to the trail into the geysers while the lot was still mostly empty.

My first thought when we arrived was to check on Steamboat Geyser, the park’s and the world’s most powerful, topping over 350 feet during major eruptions that can last for days. Norris is almost a full thousand feet higher in elevation, so there was ice on the boardwalk leading to Steamboat. I hadn’t considered what this actually meant until we got close enough to the geyser to hear it bellowing water and steam! Sure enough, Steamboat began a major eruption at 10:23pm last night that was still going on this morning!!! People who stayed at Norris Campground a mile away last night said they could hear it when it blew! Even though it wasn’t hitting 300 feet when we saw it, it was still pushing water up exceptionally high and in exceptional volume. What a treat!

We walked around the Porcelain Basin and saw all manner of bubbling hot springs and fumaroles dotting a surreal landscape. Not far in the distance you could still see a huge plume of steam from Steamboat ascending well beyond anything else in the area. We saw a ranger at the museum posting the latest eruption time for Steamboat, which was not long after the most recent eruption ended a bit over a week ago. He said that Steamboat can go a few days or several years between eruptions, but lately it’s been erupting every 3-7 days!

Recharging Becky On the Way To Old Faithful

Becky did OK for most of our time at Norris, but at the end she was almost completely done. She hadn’t had her coffee yet, she was nauseated, and she didn’t feel like she could eat. It sounded like the altitude might not be doing her any favors so I drove while she rested. By the way, I’d just like to say I love the adaptive cruise control on our 2019 Nissan—when we hit slow traffic, it made driving through it so much less aggravating as people sped up and slowed down.

At Old Faithful Becky rectified her coffee and food deficits and started to feel like herself again. It was around Noon at this point, so we decided to follow through with plans to hike to the overlook for Grand Prismatic Spring.

Several geyser basins dot Yellowstone National Park, mostly toward the southern tier of the Grand Loop Road. I believe Grand Prismatic Spring is the park’s largest hot spring pool and one of its most impressive because of the colors in and around it. You can walk right up to it with a thousand of your closest friends by visiting the Midway Geyser Basin, or you can get a much better angle higher up with a hundred of your closest friends by stopping at the Fairy Falls Trailhead and hiking 1.2 miles round trip.

I’m sure the spring is impressive up close, but we opted for the latter. As we approached it from the trailhead, we could see steam rising off of it in a rainbow of color from blue to red! I guess it earns its name! The colors of orange and red around the spring are caused by bacteria that love to live in hot water.

It was only 1:30 when we returned to the car, which gave us plenty of time to head back to Old Faithful. We wanted to hike 1.2-miles up to Observation Point, which has a better vantage point than the bleachers immediately surrounding the geyser. After we finished hitting the restroom, we hung around outside Old Faithful Lodge. A huge crowd had gathered for the next eruption of Old Faithful, anticipated in seconds or minutes at 2:30pm.

And boy did we get a show! Old Faithful bubbled up just as it began its eruption, and then off in the distance *another* geyser began to spout off!! We had a twofer!!! Beehive Geyser on Geyser Hill shot water up about as high as Old Faithful, erupting at the same time. What timing we’ve had on this trip so far!

After hiking a bit around Geyser Hill, we scratched the idea of heading up to Observation Point. Before heading back toward camp, I wanted to go inside the Old Faithful Inn. I’d seen and heard so much about this place, that it’s an architectural masterpiece, and I never got to see on our first visit.

I was dumbstruck! This building is a work of art in its highest form. The exterior and interior have more organic detail than I’ve ever seen in any structure. The lobby reaches several stories up to form a grand atrium with chairs placed all around. A violinist added even more to the atmosphere. Until damage from a 7.5 earthquake in 1959, the top of the lobby had a space for an orchestra to fill the entire space with music. What a wonderful piece of architecture!

We hiked back to our car and made our way back to Firehole Canyon Drive. This area was the first place we discovered on this end of Yellowstone that really made us see the broader texture of the park. Firehole Canyon was grand, but at the same time felt more intimate. The crowds were not as present here, except at the swimming hole.

After admiring Firehole Falls, we drove down and changed up to take a swim. Usually all mountain water comes from snowmelt, meaning it is extremely cold. The Firehole River by contrast is fed also by a number of geysers and hot springs, so it has a much more comfortable temperature. So we said why not and decided to try it out. Were it not for our tiredness, the sharp rocks everywhere under our feet, and our old age, we would have done more than wade in. We just weren’t feeling it today though, but the water was a pleasant temperature.

Dinner at Camp and Repacking the Car

We returned to camp from our adventures around 5:30pm—still with plenty of time to get ice and firewood, cook dinner, and repack the car. I took care of the fire and dinner while Becky undertook the repacking. I think my steaks turned out just right. I got to spend some time enjoying a warm fire before heading to bed.

We weren’t here at Yellowstone for long, but I felt like we had several days of experiences in just this one day! I look forward to whatever adventure awaits as we venture into Idaho tomorrow to take in waterfalls and Craters of the Moon National Monument!