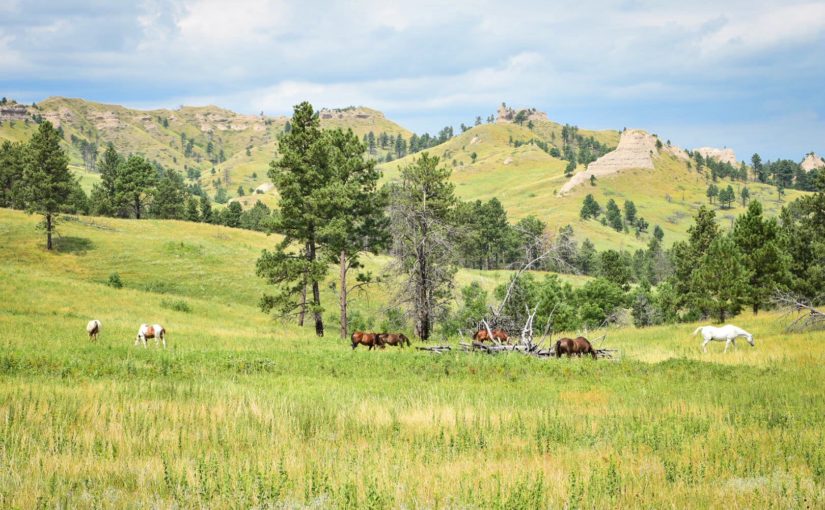 After refueling, we arrived at Fort Robinson State Park around 2 o’clock. Fort Robinson as you may have guessed was an old cavalry outpost and the site of some rather grim history with the Cheyenne tribe during the Indian Wars of the late 19th Century. Today it is a sprawling campus of historic buildings converted into museums and guest rooms set against the background of High Plains buttes.

We visited the Trailside Museum, which has a complete Columbian mammoth skeleton to greet you just inside the front door. They also have two male mammoth skulls that were unearthed with tusks intertwined—paleontologists believe they died fighting each other for a female.

After perusing the campus, we continued west on US-20 into Wyoming for our final stop for the night, Ayres National Bridge Park. What should have been a 2-hour drive got extended by a magnificently huge thunderstorm we went though just past Lusk, Wyoming. Becky could only go 40mph at certain points, the rain fell so hard. Thankfully we had no hail, and we were through the storm well before we hit I-25.

We pulled into Ayers Natural Bridge Park at about 5:30 or so. Campsites here are free, but limited to a 3-day stay. There are several picnic shelters, and they’re usually full of people on weekends. The park closes for day use at 8pm, and a gate keeps anyone from getting in until 8am the next morning. There are two riverfront campsites, but those were in use when we arrived, so we took one on the opposite side.

Our campsite came with two logs in the firepit, and I discovered half a box of firewood left behind at another site. This saved us a trip back out to find firewood! And for the second time today, we had a food full meal of grilled hamburgers.

Becky turned in around sunset, while I sat up by the fire until about 9:30 or 10pm. The forecast called for a nice calm night with a pleasant overnight low around 60 degrees. Hopefully we’ll get a good solid night’s sleep before setting out tomorrow for Yellowstone National Park!