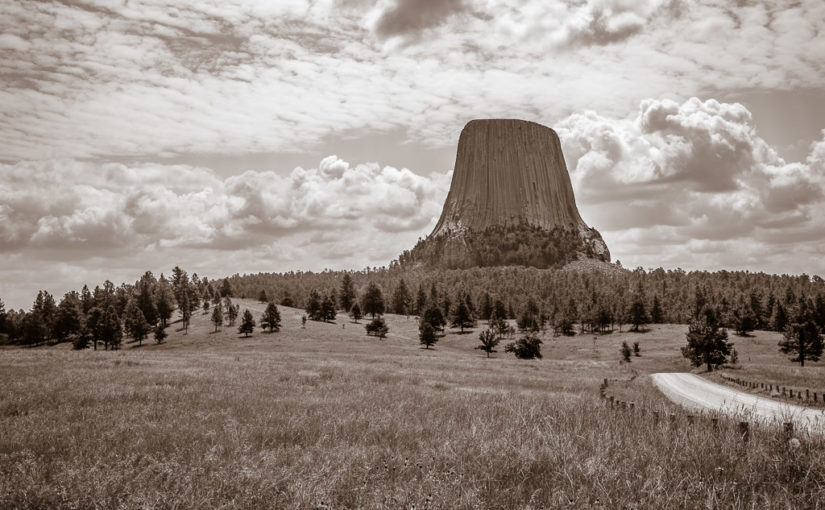 The most driving we’ve done since Day 1 started in Rapid City, South Dakota. We took the scenic route through the Northern Black Hills to Devils Tower. We then took I-90 to Buffalo, where we followed the Cloud Peak Skyway/US-16 over the Bighorn Mountains. We continued on US-16/20 West from Worland, through Greybull, and on into Cody…where we camped before heading into Yellowstone National Park the next day.

We made it! This far…

Up and off we went around 7:30am from the M Star Rapid City on Mount Rushmore Road/US-16. The weather was still a bit hazy, but it was probably the clearest morning we’d had on the entire trip. We got started a little later than we’d hoped, but we figured we still had time to hit Devils Tower and make it to Cody in time to set up camp and see the famous rodeo there. After finally remembering to clean the bugs off the windshield, we followed I-90 up to US-85, and then followed SD-34 across the Wyoming state line. Here, the road turns into WYO-24 and heads to Devils Tower. We could have stayed on I-90 and taken a faster route via US-14, but these three roads were all marked scenic.

Becky and I had already decided yesterday that what we’d seen so far of the Black Hills was pure awesome! We’d love to come back and camp either in Black Hills National Forest or Custer State Park. Seeing it for a day made us want to come back for a week! However, Devils Tower and what we saw of the Northern Black Hills in Wyoming made it hard to imagine confining a return trip to only the better-known Southern Black Hills in South Dakota.

At the last second I almost decided to stick to faster highways in the interest of time. After we got a few miles into Wyoming, though, I was so glad that we took the scenic route instead of the freeway! The red rocks and canyons along the Belle Foursche River held a type of beauty we saw nowhere else in the Black Hills. It was definitely worth the extra few minutes! Then we passed over a crest and around a curve—and caught our first glimpse of something like a giant tree stump on the horizon—that was just unmistakably Devils Tower.

It wasn’t the clearest day…but this was where we first laid sight on Devils Tower from WYO-24, still over 13 miles away as the crow flies. The hills on the right are the Little Missouri Buttes, which are just 3-4 miles northwest of Devils Tower and of the same geological composition.

Red sandstone is exposed along much of the Belle Foursche River as it runs below Devils Tower.

Devils Tower as seen from the east on WYO-110. Each angle offers a unique view.

It’s no wonder the Sioux and Kiowa saw it and thought, “This means something! This is important.” (Sorry, couldn’t resist!). The Kiowa have the coolest story about what Devils Tower means. The story is told in Ken Burns’ documentary, The West, and they had a display about a similar legend.

I can’t help but feel a sadness about the cultures that were destroyed by the United States’ westward expansion. The Indians really loved the land, and all the creatures that lived in it (at least when they weren’t warring with rival tribes). While the new Americans certainly intended on leaving their imprint on the West, often for the love of power and riches—they at least saw that places like Devils Tower should be held sacred, just as the Indians thought they were. And thus in 1906 with the passage of the Antiquities Act, President Theodore Roosevelt created Devils Tower National Monument—the country’s very first national monument.

While photography is all about capturing light, creating dramatic images is all about the shadows—and even in the middle of a hazy summer day, Devils Tower delivers from this northwest view! I can’t wait to see this printed on glass or metal…!

One last shot from the west, taken from the visitor center

At the visitor center, there were lots of ranger-lead activities and several hiking trails around the mountain that I would love to have seen. There were plenty of gorgeous campgrounds in the area too, within the national monument land as well as all up and down the nearby Belle Foursche River. Unfortunately, we didn’t allocate much time here in favor of more time at Yellowstone—and we needed to get going in order to make Cody. So on we pushed to US-14 and I-90…