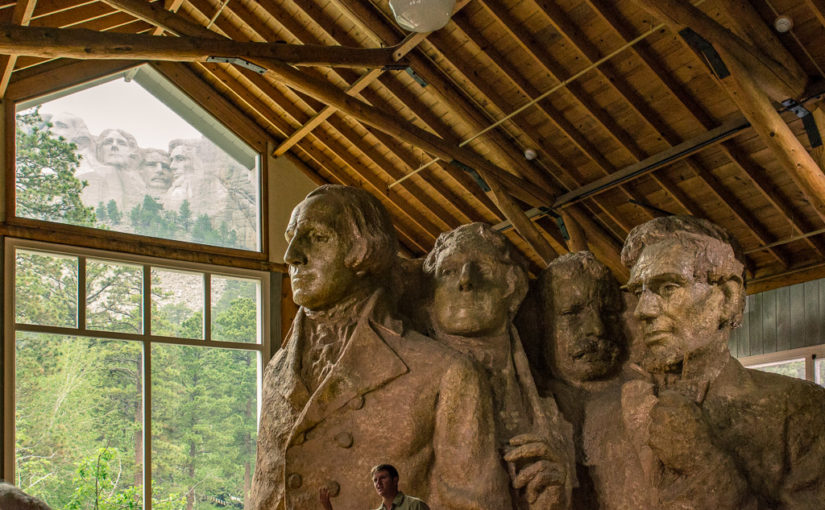 The weather held up really well, with just a little rain falling on us south of Rapid City as we drove from Badlands National Park to lunch in Keystone. We visited Mount Rushmore and got down to Wind Cave National Park just in time to catch the Natural Entrance Tour. Then we drove north into magnificent Custer State Park—WOW!—and finally made our way to our motel in Rapid City via the spectacular Iron Mountain Road.

Dreaming of the Old West

After a positively uneventful and peaceful night in Cedar Pass Campground at Badlands National Park, Becky and I woke up refreshed, and packed up our tent bound for the Black Hills. Becky cooked eggs in a tiny little portable stove she bought that resembles more of what a caterer uses to keep food warm than an actual stove. This was what we had to use to cook at Badlands, since there were no campfires allowed due to the risk of prairie fires. It took a while to cook a single egg, but it was effective.

After seeing I-90 and the Badlands Loop Road, I thought it would be best to drive to Rapid City via SD-44 so we could see the other side of the Badlands. Few likely see this area, since it is a much less popular part of the park. This was a great drive, which starts by going through the tiny little town of Interior, then passing through the town of Scenic, and finally to South Dakota’s second-largest city, Rapid City.

SD-44 straggles the border between Badlands National Park and Buffalo Gap National Grassland as it stretches West toward Scenic and Rapid City.

Black-footed ferrets, once extinct in South Dakota, prey almost exclusively on prairie dogs for food. They were reintroduced to the wild here in the 1990s, and as a result prairie dogs are protected in Buffalo Gap National Grassland.

Most of the way was either within Badlands National Park or Buffalo Gap National Grassland. The road runs alongside an abandoned railroad line where small wooden trestles still cross creeks, just without the rails. There were also plenty of pulloffs where you could drive into the grassland on dirt roads. Signs said that this was a management area for the black-footed ferret, which was thought extinct in the late 1970s. A few years later they were spotted again in Wyoming, and eventually reintroduced in areas such as this one. For the majority of the route we could see badlands going on for miles and miles and miles.

The railroad line crossing all of the creeks just a few feet above was odd to me. The fact that the creeks had grass all the way down to the water along their entire banks was strange to me too. Back East, the railroads are built far above floodplains, and there are trees and underbrush all around creeks and rivers, and pretty much just mud on the dropoff into the creek. The rolling hills and twisting and turning railroad bed conjured up all sorts of westerns and cartoons I’d seen all my life with scenery like this. When we entered into Black Hills country, it especially felt like I was living in an old western movie, except that technology and the 20th Century had happened and it was a little different now. It was strikingly beautiful country, and a lot of the things I’d seen in stuff set in the Old West started to make sense. I could imagine riding a galloping horse through this valley and on up into Rapid City with the rolling prairie on either side of me, and with the first pines appearing in the Black Hills.

Writing the Itinerary As We Go…

Now today had me a bit nervous…up to this point, we had all of our accommodations planned and/or reserved well before we left, except for the motel in Wisconsin. I had also managed to score three nights worth of campsites in Yellowstone online the day we left, and after that nothing was reservable anyway. The one and only night I hadn’t planned out was tonight…I figured on getting a campground as close as possible to Mount Rushmore. I thought it would be good to be able to capture it at sunrise in case sunset didn’t work out, plus it would eliminate any extra driving at the end of the night and hopefully we’d be able to relax. Unfortunately, there were zillions of campgrounds in the area and I had no opportunity to research many of them. The ones I did check were all super-expensive, as in might-as-well-get-a-motel expensive.

When we got cell service back again and I could check the forecast, the potential rain and the possibility of having another repeat of DeSmet weather settled it! I Googled around and found a motel—the M Star Rapid City. It was the cheapest thing I could get, and it was close to I-90, so I jumped on it. That was settled!

Now it was time to decide which destination to hit first…there were two on our itinerary. I’d originally planned on going to Wind Cave National Park first thing, then heading to Mount Rushmore by way of the Iron Mountain Road and seeing Rushmore closer to sunset. This would give me the opportunity to photograph the sculpture both in the Golden Hour and after dark when it’s all lit up. It was still partly to mostly cloudy, but the forecast called for overcast and possibly rain in the evening. This significantly reduced the probability of getting any interesting shadows or blue sky—and it shouldn’t matter what the weather outside is to tour inside a cave—so we elected to hit Rushmore first after we grabbed lunch.

We got a bit of rain between Rapid City and Keystone. I’d never seen a freeway interchange with wood-framed overpasses like this one at the junction of US-16 and US-16A!

The drive out of Rapid City and deep into the Black Hills was peppered with many and varied tourist traps. Several were totally designed to grab an eight-year-old’s attention so that they would pressure their parents to visit. I still have to admit, a few were tempting to check out.

Right before Mount Rushmore, you go through the town of Keystone, which seemed to have more hotels than residents. Again, there were many and varied tourist attractions, several of which were themed around the presidents and their history. We stopped at the Grizzly Creek Restaurant to try their burgers. I went for the bourbon burger and Becky had the buffalo burger. They were tasty and hearty, but not remarkable for the price. They have ten beers on tap, two or three of which were the standard Miller and Budweiser choices, while the rest were all local microbrews. We still had a lot ahead of us for the day, so I decided not to have anything after I tasted a sample of the only beer that really sounded good to me—which was a wheat beer that tasted too hoppy for my liking.

The clouds were just beginning to subside as we caught our first sight of Mount Rushmore from SD-244.

Mount Rushmore was a busy place, probably the busiest we’d seen so far on this trip. It was nowhere near congested though, especially compared with just about any of the major tourist attractions in California. As you drive up on SD-244 to the monument, you actually catch your first site of it, which is pretty striking. At the entrance are ticket gates where you have to pay to park in the massive deck they built back in the 1990s. Unfortunately, the Annual Pass we just bought at Badlands doesn’t apply here, as a separate organization operates the parking deck. Finding parking was not too difficult, and neither was making our way up to the monument.

Mount Rushmore towers over the grand entrance to the memorial from the parking decks.