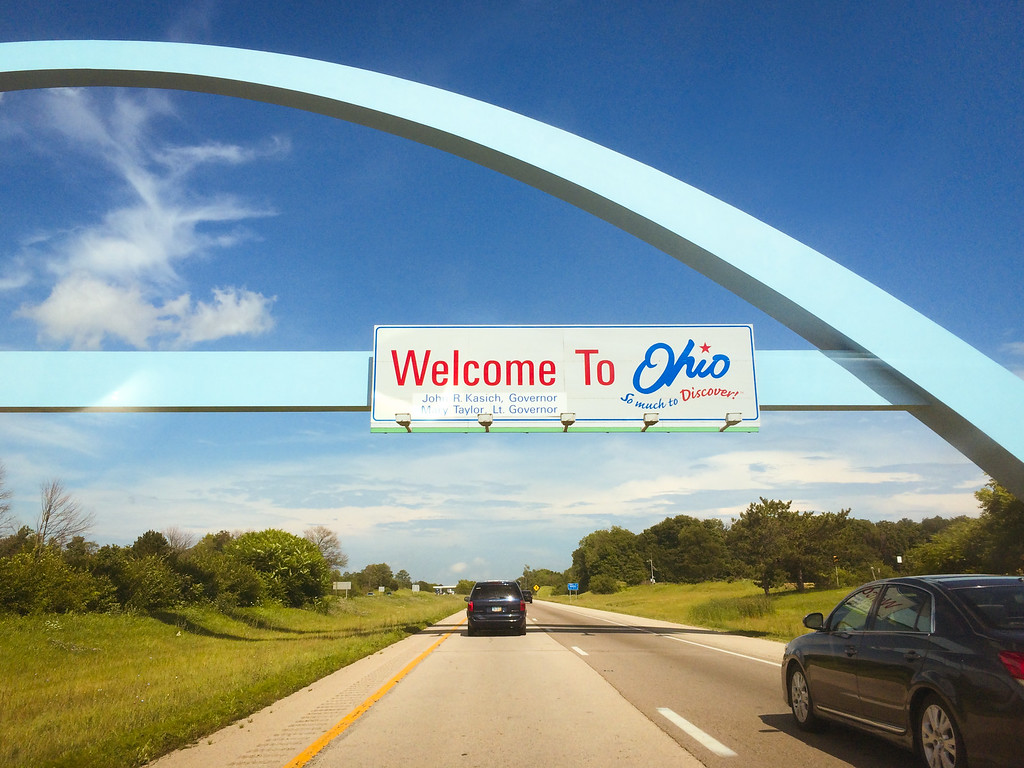 We woke up to heavy rains that were predicted to last longer than we wanted to stay in St. Louis, so we just kept heading east toward home. The extra time allowed me to cook up a little surprise for Becky with our friends near Columbus, Ohio.

Itching to Get Going

It was a dark and stormy…morning. Rain fell torrentially as if it was trying to wash our motel off the map like a bad stain. I think I would have been OK with that, so long as it waited until after we checked out…

It’s no fiction…it was dark for being first thing in the morning, and I’m not kidding when I say that this was the only motel room on the whole trip that seemed like a joke for the price.

Becky and I got up before 6am Mountain Time the day before, and took turns driving across Colorado, Kansas, and most of Missouri yesterday. When my head hit the pillow at close to 11pm last night, I fell fast asleep. I wasn’t crazy about our motel, but I was too tired to worry about it.

Let me say that I would not recommend the Colonial Inn off of I-70 in High Hill, Missouri. Before I went to bed last night, I saw a sign on the air conditioning controls strongly encouraging guests to turn off the A/C while they’re gone. I mentioned yesterday that there was a strange damp sort of smell that I hoped subsided with the A/C running for a while…well, it was still there. This room definitely had a mold problem, which was not readily visible by looking at it. I’m highly allergic to mold, as my itchy eyes reminded me this morning. It’s really no surprise, because the A/C was off…and probably remains off almost every entire hot, humid Missouri day in the summer…so the mold probably likes it here.

I also awoke once in the middle of the night and noticed the sheet was not really on my corner of the mattress…because apparently they don’t use anything but top sheets at this establishment. I thought I pushed it back, but when I awoke this morning, it was all out of place again…which is why one uses bottom sheets to cover the mattress!

As I got up to go to the bathroom, I noticed a sign on the door. It became clear to me why the hotelier took so much information…the sign clearly indicated that management would charge my credit card and call the police should any of my room’s appurtenances come up missing. For a $39 motel room, they certainly had decided to go out of their way to protect their small investment in inadequate bedsheets. This may be a little paranoid, but I thought this motel room could easily get a lot more expensive if the maid got sticky fingers and pointed one of them at us.

I was in no way interested in lounging around to be implicated or to fill my airways with more of the milldewyness, and neither was Becky. The downpour outside made rushing to the car quite easy. Our stuff barely got unpacked, so it was pretty easy to throw back into the trunk. The rain was still coming down hard enough to get us pretty wet though.

With the heavy rain coming down, I checked the forecast and the radar. The plan for this morning was to make a quick stop to photograph the Gateway Arch in Downtown St. Louis. The radar…and my ears…told me that the rains were not going to cooperate…so when we got in the car, I decided to scrub St. Louis and get home a bit earlier. Although this did give us just enough time…

Our friends, Justin and Jennifer, at a steampunk-themed party we held at Pugh Cabin at Malabar Farm State Park

You see, we have two very good friends who live in Delaware, Ohio…about 20-30 minutes from the I-270 Jack Nicklaus Outerbelt around Columbus, which is on our way home. I wrote about Justin and Jennifer last year after Justin, a roofer at the time, fell and suffered a traumatic head injury that scared us all and landed him in the hospital for over a month. He’s mostly his old self again, but it still takes about five full years to fully recover from an injury as bad as his. Anyway, before we left the hotel, I snuck a text out to Justin and Jennifer to see if they could meet us this evening and surprise Becky—and they were game! I just needed a proper smokescreen for stopping somewhere innocuous in their area. I wasn’t totally sure of the timing, but I thought we might be able to make it to the REI store in Dublin before it closed at 6pm.