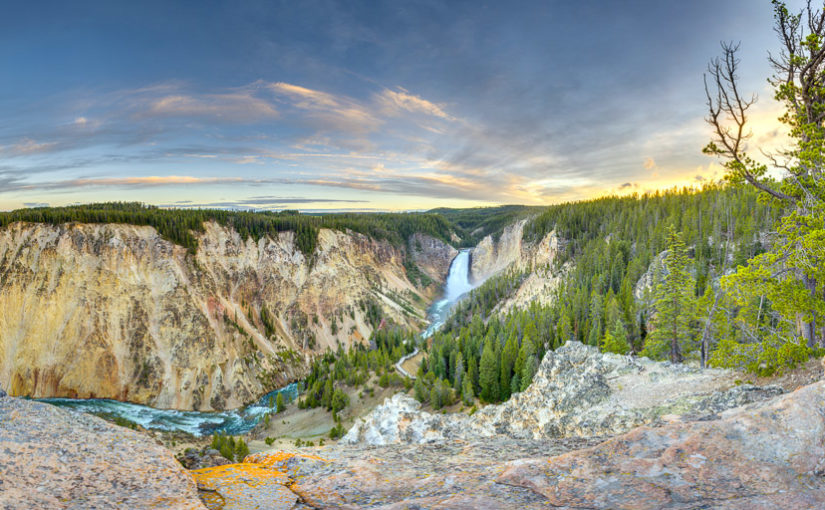 Our first full day in Yellowstone took us to Tower Fall in the morning and Mammoth Hot Springs at midday. We grabbed lunch outside the park in Gardiner, Montana, then found some wood and a moose on our way back to Canyon Village. We closed out the day at the Grand Canyon of the Yellowstone River and ate a late dinner back at camp.

Has a full week already past? Are we only on Day 9? Just yesterday I told Becky that 1 week and 2 hours ago (because of the time change) we left! It also doesn’t seem possible that today was Friday and that we still have more than a week to go…wow…we planned all this??? I don’t know how we did it, but I know we could only have been this successful from working together! I know I couldn’t have done this as well without Becky!

Today’s entry starts with the end. Right now I’m sitting at a biggole fire that took longer than I hoped to build, but I’m feeling content that I am warm, our tent is still good, we haven’t run out of money, and we are doing OK. It’s been tough sometimes and we’ve gotten in each other’s hair occasionally, but we have really enjoyed ourselves over the last week. We’ve learned a lot, and we’ve gotten to see a lot of the country!

I feel like we’ve done really well so far, but today I know my “OMG Yellowstone!” mania pushed Becky way too far. We were up at first light this morning in time for sunrise. We were out before the tourists wake up to clog all the roads and scare away all the animals. And then we ran almost all day without much downtime. It’s almost midnight now, and we still aren’t quite in bed. The original plan for tomorrow was to start early like we did today, but I know I ran Becky ragged, so I doubt it will work out that way.

Let’s rewind and go back to how last night went. Becky was super cold, and had to cover her face with the top in-between blanket. It was by far the coldest night we’ve ever slept in. We’re up around 7,900 feet in elevation here at Canyon Campground, which means the atmosphere is much thinner and the temperature in turn stays much colder—often only in the 60s for a high and down into the 30s at night, even in July. By contrast Mammoth Campground, near the park’s North Entrance, sits at about 6,200 feet and experiences temperatures that are roughly 10 degrees warmer. I was concerned about whether we’d get rain or wind on top of the cold at night, but thankfully the winds calmed after dark and it only rained during the day.

Layers are key to beating the cold. Becky and I both wore at least 2-3 layers up top, and I had two on the bottom. We had two blankets between our sleeping bags and our air mattress to insulate us below, and then another one inside the sleeping bags to keep us warm on top. Without the extra blankets, we would have been unbearably chilly! But as it was, everything was rather comfortable for me, so long as I kept my hoodie up to keep my ears warm.

The Yellowstone River as it passes out of its grand canyon

Now I wanted to be up early enough to get some photos of sunrise at Yellowstone Falls, which is very close to our campground. Becky agreed that she’d get up at 5:30am and we’d be ready to go at 5:45. We got going right on time. The weather was definitely brisk, but the mostly cloudy sky looked to make for interesting images so long as the clouds didn’t completely block out the sun. After shooting the falls, we planned to go back to camp to shower up, then hit Mammoth Hot Springs and come back to camp again for early dinner and maybe a nap. Later, we’d go back to Yellowstone Falls in time for sunset.

When we drove out to Yellowstone Falls, however, there was a thick blanket of fog over the entire canyon :-(. This would not do, and I wanted to take advantage of the early light, so I decided we’d upend everything we’d planned and drive an hour to Mammoth Hot Springs right away. My mania had kicked in, and it wasn’t even 6am…

A few miles down the road from Canyon Village, we stopped at the Wabash Hot Springs Overlook, since it looked like our last good opportunity to take advantage of the sunrise. As I set things up, it was awesome to watch the sun cast its first light on mountains that had to be miles and miles away.

Things were starting to warm up, but my stomach started asking for food and Becky started asking for coffee…so we stopped by the Tower General Store. It was too early for it to open, so we made use of the time and hiked the short trail to 132-foot Tower Fall.