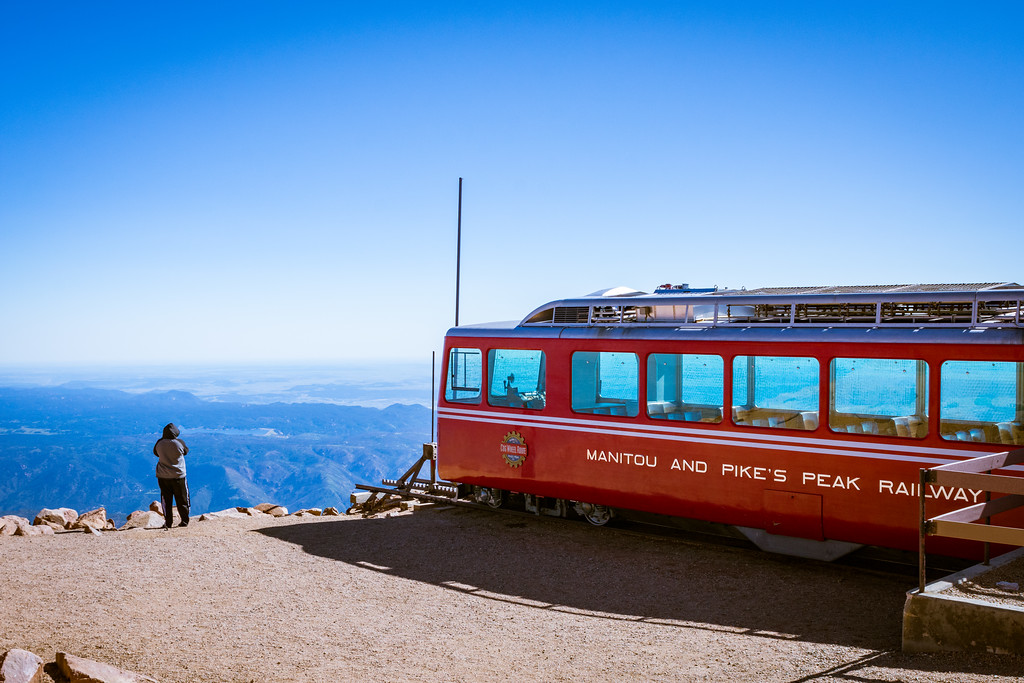 We took a short drive to spend the day with our friends, Lexi and Joe, in Colorado Springs. After going to the top of Pikes Peak on the cog railway, we got lunch and visited the penny arcade in Manitou Springs. Afterward, we visited Helen Hunt Falls and Garden of the Gods. We headed back to my cousin’s in Denver not long after dinner.

We got up and on the road at 6am today. We were headed to Colorado Springs to spend the day with our friends, Joe and Lexi. They wanted to get a jump on the crowds heading up to Pike’s Peak, so we agreed to meet at their house at 6:45. Neither Becky nor myself are what you call “morning people”…but in three days, we would be back home—in the Eastern Time Zone, which is two hours ahead of Colorado. So as much as we’d have loved to sleep in, it really was practical to get going way early.

The sun was already cracking the horizon by the time we got on the road. The air was a little hazy, but that only added to the dramatic look of the golden light and dark shadows on the terrain ahead of us, and on the Rocky Mountains to our West. Though we were heading from one major city to the next, the drive was a mere 45 minutes, thanks to my cousin’s house being as close to the edge of Denver’s suburbs as you can get. The farther south we went on I-25, the more it felt like we were in the foothills rather than on the plains like in Denver.

Becky with Lexi and Joe

Now Lexi and her family are originally from Cleveland. I met Lexi on the exact same day as I met Becky for the first time, actually! She was already a good friend of the family by then. Becky’s sister, Rachel, was actually in Lexi’s wedding three years ago. Lexi ended up in Colorado Springs with her two brothers when her mom remarried a few years before that. Lexi’s husband, Joe, was good friends with Lexi’s brother, who recently married one of Rachel’s best friends after he moved back to Cleveland. Lexi came in for our wedding, and we met Joe when they both came in for her brother’s wedding. So yeah…we know Lexi and her family…but today would be our first time really getting to know Joe. So far he seems like an OK guy…

We pulled into Joe and Lexi’s driveway a minute or two after 6:45. They both rushed out and told us to jump in their car so we could get to the train in time to get good seats. For the rest of the day, Joe did all the driving, which was an awesome break for us!

In 20 minutes we were at the station for the Pikes Peak Cog Railway in the mountain town of Manitou Springs. Parking was painless, and we were in line for good seats for the first train of the day, which departed at 8am. The station was rather compact, with just enough room for a ticket office, a gift shop, small restrooms, and an area to queue passengers boarding the train. Unfortunately, they do not allow outside food or drinks—not even water bottles—and therefore the prices remind you of what you’d pay in a movie theater. Joe was kind enough to buy each of us a 32-ounce bottle of water, but my eyes popped out when I saw it cost him $13!

Speaking of water, I was glad that we were on the first train, and therefore there was not double the amount of people because of returning passengers. I’m sure the small restrooms get quite a bit of use since there are no restrooms aboard the trains. Altitude and hydration were still foremost on my mind, being that even on the ground we were already at 6,000 feet. Since it’s a 60-90 minute trip each way, I knew that managing my drinking and peeing would be critical to my comfort today.

As we waited for the train, we could see splendid examples of the reddish colored Pikes Peak granite all around. This rock was everywhere in and around Manitou Springs, and really contrasted well with the green of the pines and aspens all around us in the golden rays of the low morning sun.

Tree-covered slopes give way to rocky ones as we ascend toward the tree line, where the climate is too harsh for trees to grow.

We were on the train and out of the station at 8:07am. From here on up to the top, the conversation amongst ourselves was intertwined with that of our conductor and tour guide, Luke. Luke was a young man who looked to be at most 25, but easily could have been much younger. He shared quite a bit of history on Pikes Peak and the railway. He shared that Pikes Peak had several names before it was finally called Pikes Peak. The mountain is named after Zebulon Pike, who mounted an expedition to climb to the summit, but failed. And while Pikes Peak is but 1 of Colorado’s 53 “fourteeners”, or mountains over 14,000 feet, there are very few mountains between it and the Great Plains. This makes it the most prominent mountain in Colorado’s Front Range, making it appear to stand alone for hundreds of miles over the Great Plains to the east—all the way to Kansas.

As Pikes Peak has a story that is unique among Colorado’s mountains, the Manitou & Pikes Peak Railway also has a unique story among Colorado’s railroads. Back in the 1880s, railroads were built primarily for industrial purposes to take advantage of the state’s many mining opportunities. After a ride to the summit of Pikes Peak on the back of a donkey, Zalmon Simmons of Kenosha, Wisconsin and founder of the Simmons Beautyrest Mattress Company, saw a business opportunity. He decided to build a railway to make it way easier to go to the top of Pikes Peak, and he did it purely for tourism. He went home and lined up investors, and two years later he was taking people to the top of Pikes Peak for a cool $5 each—that’s $125 in today’s money. The railroad was a hit back then, and since our early train was completely full, I’d say it’s still a hit today. The good news is that the cost of tickets has not kept up with inflation, as round-trip tickets cost only about a third of $125—and that may be why they sell water at $3.25 per bottle.

Anyway, there are three cars on each train heading up and down the mountainside. There’s an aisle down the middle with three seats on the left side going up, and two seats on the right side. The seats are arranged front-to-front and back-to-back, meaning every passenger faces another passenger. Before we embarked on our 18-day journey, a friend back home warned us that we want to get seats that angle up rather than down. And about 15 minutes up the mountain, Luke suggested that we introduce ourselves to the folks across from us—we were heading into our first 25 percent grade, and we’d probably be getting more familiar with them as a result. This was easy for us, because we knew each other, but we followed his advice nonetheless. Becky and I were angled down on the way up, though, and we really didn’t have any problems staying in our seats.

Joe points out at something when we are well above the tree line.

Each set of seats facing each other has it’s own window. On the bottom, the windows are all open, and it’s easy to see over them and take pictures. By the time you pass the tree line into alpine elevations, the temperature is decidedly cooler, so Luke told us we could close our windows and turn on the heater for the rest of the trip. The heater made things quite comfortable in spite of the 36°F temperature at the summit. I would still recommend having at least one or two extra layers of long sleeves handy though, not just for the trip, but the summit too.

Before we reached the top, Luke advised us that we’d have a little less than an hour there, and that the train whistle would blow ten minutes before departure. He said it was important for round-trip passengers to be on the train at departure—Otherwise we would “slowly transform into hikers—and what a hike it is! Thirteen miles in one direction from the summit back to Manitou Springs. And for you runners out there thinking, ‘thirteen miles!’, yes, they do have a marathon each year, going up and back down the mountain.”

The Summit of Pikes Peak

The view at the top!