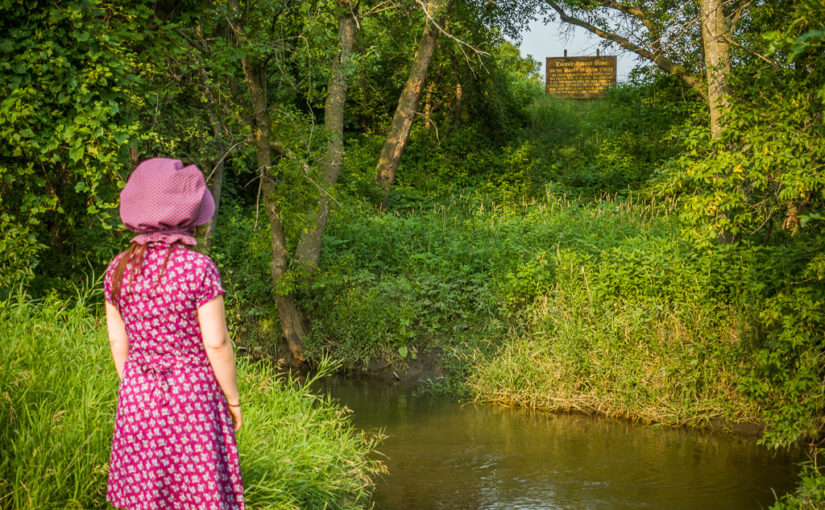 We crossed the entire state of Minnesota, stopping in Walnut Grove, the settings for Laura Ingalls Wilder’s book, On the Banks of Plum Creek and the Little House on the Prairie television series. We then drove to the Ingalls Homestead in De Smet, South Dakota.

I thought this would be a short one today, seeing as our only true destination was our next Laura Ingalls stop, Walnut Grove, Minnesota. We hadn’t planned on staying in Walnut Grove, but rather we intended to carry on to DeSmet, South Dakota, our third and final Laura Ingalls stop. We had six hours of driving to be followed by one day and two nights of exploring DeSmet and relaxing! Unfortunately, our first night in South Dakota did not go quite as we planned…which I’ll get to after a few reflections on the last of our time in Pepin, the drive across Minnesota, and our visit to the Laura Ingalls museum there in Walnut Grove.

Packing Up in Picturesque Pepin

It was our first day packing up the tent and the campsite on this trip, plus we got back to the campsite late after sailing Lake Pepin, so I was nervous about getting a jump on the day. So nervous, actually, that I didn’t bother to shoot a pano of our campsite until after we’d packed the whole thing up. Before we left, I wanted to grab a pano of the waterfront at the center of town. Plus, we had been invited by our new friends from the cruise to brunch, so we thought we’d at least take a few minutes to have coffee with them.

360-degree panorama of our campsite at Lake Pepin Campground. Click and drag to look around. Click the top right button to go full-screen.

It was funny, though…when we went to shoot the pano, we saw Maria from our cruise perusing the streets just soaking everything in and enjoying it. And Pepin really was a very special-feeling place…great for Laura Ingalls lovers, art walks, and bumming along the riverfront. It felt like being at the beach, except it was a river instead of an ocean, and it was Wisconsin instead of the East Coast. Maria hung out with us after I shot the pano, as we were looking for Dave to see if we could find a tool I use to blow the dust off of my lens. She, as everyone else but the captain on the cruise, was from Minneapolis, and told of how she worked for many years with the family business in worldwide shipping. Her family was Greek, and she ran much of the company with her brother until recently when she retired and started her own business as a wellness coach. She shared how she was always more laid back than her brother, and that she really enjoys having a much more zen lifestyle than she had with the craziness of running the shipping business. She certainly seemed to be having a wonderful weekend so far, and it was great to see someone enjoying life like she was.

360-degree panorama at First & Main in Pepin, Wisconsin. Click and drag to look around. Click the top right button to go full-screen.

We then went out to our friends’ farm, about two miles out of town. The family was extremely hospitable, and their farmhouse and all their property was beautifully manicured and had a lot of old-fashioned charm. They were a wonderful family to have met, and we really enjoyed their company! They gave us a few suggestions of sights to see in South Dakota and suggested taking in as much of the Mississippi River as we could.

Maiden Rock Bluff along the WI-35 west of Pepin

We decided to take their advice and proceeded to take a slightly more northern route along the river west of Pepin. Then we meandered our way across Minnesota, working our way to US-14 at Nicollet. Minnesota was all rolling hills as far as we could see. Eastern Minnesota was forested with a few farms, giving way to fewer trees and almost exclusively farmland with a few small towns here and there as we proceeded west.

Approaching Lamberton, one of several small farming towns along US-14 in the Southwest Minnesota prairieland

Downtown Walnut Grove, two blocks off of US-14 and three blocks around the corner from the museum

Outside the main building & gift shop at the Laura Ingalls Wilder Museum in Walnut Grove, Minnesota

Eventually we arrived at Walnut Grove. We may have seen about four cars for the last half of that—I’m not sure if that’s because of lack of population density and tourism, or just because it was July 4th. Either way, roads and streets were extremely quiet, and there were very few people at the Laura Ingalls Wilder Museum in Walnut Grove, which I’m told was wall-to-wall people just the day before.