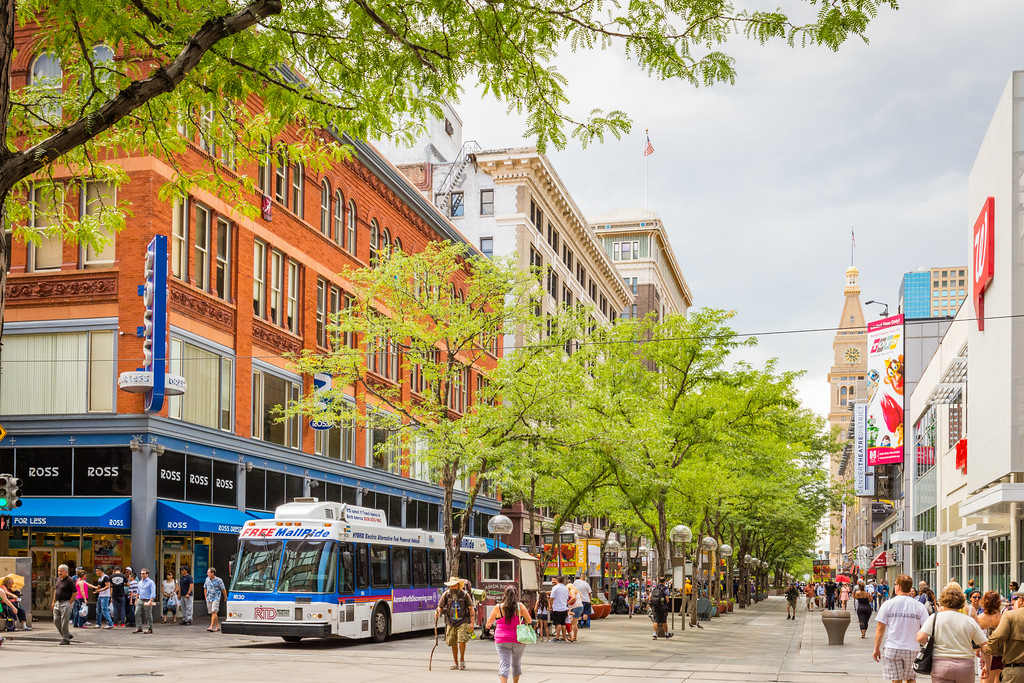 After a big day in Colo Spgs with Lexi and Joe yesterday, we slept in soundly at my cousin Kelli’s house in Lone Tree. They have a beautiful house in a subdivision near the edge of suburban Denver. The end of their street is high enough that you get an incredible view of almost the entire city stretching out in front of the Rocky Mountains.

After running so much the last few days, we decided to take things slow this morning. We didn’t have to be anywhere until noon, when I’d planned to meet a colleague for lunch. We made plans to meet up on the 16th Street Mall in Downtown Denver at my cousin D.J.’s suggestion. Being that I’m super interested in urban planning and design, I wanted to see what they’d done there, and I was interested in checking out the light rail system the region had built in the past 30 years. This evening we’d be back where we started, as my aunt and all my cousins were coming to Kelli & Jamie’s for a barbecue. Some of my younger cousins were well into their 20s and married now, and I hadn’t seen them in almost 15 years, so I really looked forward to this!

After spending so much time on the road, it was really nice to have a home base and hang with friends and family for a few days. By this point, our cooler didn’t have much beyond a few bottles of beer and our condiments, but it’s amazing how much more we appreciated the simple things…like refrigerators! Since we got to Kelli’s, we no longer had to check and restock ice. And then yesterday, Joe drove us around for the entire day, and today, the train would drive us everywhere.

Well, everywhere except breakfast…Jamie recommended a little place a few minutes from their house called the Silver Creek Diner. Being that this part of town was built in the last decade or so, the decor had a clean white contemporary look with some warm color accents. And even though it’s in the suburbs, Becky and I appreciated that it was a mom and pop establishment instead of a national chain. The service was top-notch, the prices were good, and the food was superb! Becky and I both went with eggs, bacon, toast, and home fries. Everything was prepared to perfection.

After breakfast, we still had a little time before we headed downtown, so we dropped into a nearby REI store to check out camping gear. Despite some negative experiences with wind and rain on this trip, Becky and I were far from finished with camping! And while we weren’t likely to camp on the way home, we were interested in options for upgrading our tent and our ever-flattening air mattress. Besides that, the nearest REI for us was over 100 miles away, so carpe diem!

It was either a five-minute drive or a ten-minute walk to Lincoln Station where we could catch either the E Line to Union Station or the F Line to the middle of the 16th Street Mall in Downtown Denver. Since Union Station sits at the end of the 16th Street Mall, either train would do…but first we had to buy tickets. RTD uses a zone system, which made it a little more confusing to figure out which tickets we needed to buy. I finally realized that we needed to buy regional tickets to get downtown, and opted for two all-day passes for $14 each. The price was a little steep compared to transit systems I’d used recently in New York, Chicago, Los Angeles, San Francisco, or Cleveland, but I figured it would probably be easier and cheaper than driving and parking.

Union Station, with the tops of the Amtrak and commuter rail platforms in front

Even though we were well between rush hours, trains ran rather frequently. It took no time at all before we were on our way to Union Station. All but the last few miles run right next to I-25, with several stations at major interchanges along the way. The stations connected the line conveniently with nearby shopping centers, office parks, hotels, and apartment complexes. When the line diverges from I-25, it follows old railroad right-of-way through a more industrial neighborhood before passing through stations for Mile High Stadium, Elitch Gardens, and Pepsi Center. The very last stretch goes through a bustling canyon of brand-new residential complexes before pulling into Union Station. Amtrak and commuter rail lines all converged here, and the underground bus terminal below saved everyone from dodging a plethora of noisy buses as well. All of this was a short walk to the west end of the 16th Street Mall and the heart of Downtown Denver. It was awesome to see such a modern and efficient transit system in a major city!

The Colorado State Capitol peaks through the trees at the east end of Downtown Denver’s 16th Street Mall.

The most prominent historic building on the 16th Street Mall is the 20-story Daniels & Fisher Tower, opened in 1911.

Now when my cousin described the 16th Street Mall, I immediately wondered if it wasn’t like East 4th Street back home in Cleveland. East 4th Street is a short street mostly closed to traffic for one block and lined with restaurant patios. The 16th Street Mall is far more extensive, being closed to all but pedestrian and bus traffic for about a mile between Union Station and the Colorado State Capitol. The only buses running the length of the mall were the free Mall Ride buses. Most of the street has extra wide sidewalks and a tree-lined median in the center. The city’s most dense development stands within three blocks of some point of the 16th Street Mall.

As for the architecture of Downtown Denver, the very boxy shape of the tallest buildings always struck me as rather unimaginative. The utilitarian shape of the rectangle seemed to not only define the city laterally in its street grid, but also vertically in its skyscrapers. Once I saw the city from street level, however, I realized there is a wealth of historical architecture here too. While many modern buildings lack individual flare, many well-preserved buildings from as far back as the 1880s lend their charm from the days of the Old West.

The street is well-lined with plenty of shops, restaurants, and hotels. While there is a strong national chain presence like that of many upscale suburban areas, there’s still a healthy mix of more down-to-earth establishments along with leather, clothing, and souvenir shops that are uniquely Denver.

Lunch at the Paramount

After exploring for a bit, it was time to make our way to meet for lunch with my colleague, Chris Barron. Back in 2012, I joined the Google Trusted Photographer program, which sent independent photographers out to sell virtual tours to businesses and add them to Street View. Chris started working in the program here in Denver a few weeks before I did in Cleveland. Last fall he picked up a national client with a Cleveland location, and that’s how we ended up working together. We’ve kept in touch since that little job, and it worked out to meet up in person for the first time while we were in Denver.

We had lunch at the Paramount Cafe, which was part of the historic Paramount Theater. The noon lunch hour was winding down, so we easily got a table on their spacious patio. The prices were a little higher than you’d expect for the quality, but we were in red-hot Downtown Denver. Chris said that housing costs in the city were on their way up due to the draw of vibrant urban living and jobs in the area. He said this hadn’t been going on for long though, maybe the last five years or so, and that 16th Street has never been as good as it is now.

After lunch, we explored down by the state capitol building. Then Becky perused more shops and I shot some more photos along the 16th Street Mall. Since it was an easy landmark, we agreed to meet up by the tall skinny clock tower, the historic Daniels & Fisher Tower. Clouds rolled in from over the mountains by then and it was almost 4 o’clock, so we caught the next F Line train back to Lincoln Station.

Passengers line up for a northbound F Line train at California Street.

Back to Lone Tree

The wisdom of commuting downtown on the train rather than driving was clearly evident on the way back. The train wasn’t crowded, but a couple of spots on I-25 definitely were. Our 45-minute commute to Lincoln Station seemed long compared to the 25-minute drive with no traffic. I’m sure rush hour usually evened those numbers though, making the train a much easier and safer choice.

As the train moved on, we could see storms headed toward us from miles away across the city. I hoped that we would get back before they got to us, but that was no to be. As the train came to a stop at Lincoln Station, raindrops hit the glass on the door with impeccable timing. While I tried to push my camera into its bag, the doors opened and we made a run for it! I spotted a bus shelter about 300 feet away that looked like a good place to wait out the wind and rain.

After a few minutes, the storm let up. I thought we could make it back to Kelli & Jamie’s before the next burst hit, but we only made it halfway before it started really coming down again. I told Becky I wanted to run the rest of the way, but she said she couldn’t. I took off and got winded very quickly thanks to the cursed altitude. I drove the car down to pick Becky up, but she was really only about a block away. She laughed when I pulled up, but she did appreciate being able to get off her feet. I had to do what I could to rescue my fair maiden, even if it was only a little bit!

When we arrived at the house, there was a festive vibe in the air. Jamie was finished with work for the day and preparing food in the kitchen, while Kelli had just gotten home a little early and was upstairs getting ready. Our timing worked out perfectly too, since we still had almost an hour before everyone else came at six o’clock.

It was awesome to see everyone together! I finally got to meet the husbands of my younger cousins, one of whom just got married the weekend before. I also got to meet the first member of the new generation, my cousin Alysha’s son, Caleb.

My Aunt Pat, Becky, and I

My aunt and cousins all did an impeccable job preparing everything. They even went out of their way to have food that was dairy-free for Becky. We played bags (many in Ohio call it cornhole) and even Red Rover in the back yard.

Things started winding down and I realized that I didn’t want things to end with us unceremoniously hitting the road early the next morning. We had such a good time together that I suggested we could do breakfast tomorrow…although it would have to be early, since we had to get to Missouri at a reasonable hour.

Apparently this idea was a hit! Becky worked things out with my Aunt Pat and Kelli to meet up nearby at 6:30. So rather than sleep in on their day off, almost everyone planned to get up early to spend a little more time together and see us off! Awesome! And what a great way to start our journey home!

My aunt, all of my Denver cousins and their spouses, Becky, and me
Previous Post: Day 15 – Colorado Springs & Pikes Peak
Next Post: Day 17 – Kansas, Kansas, More Kansas, and Kansas City Barbecue