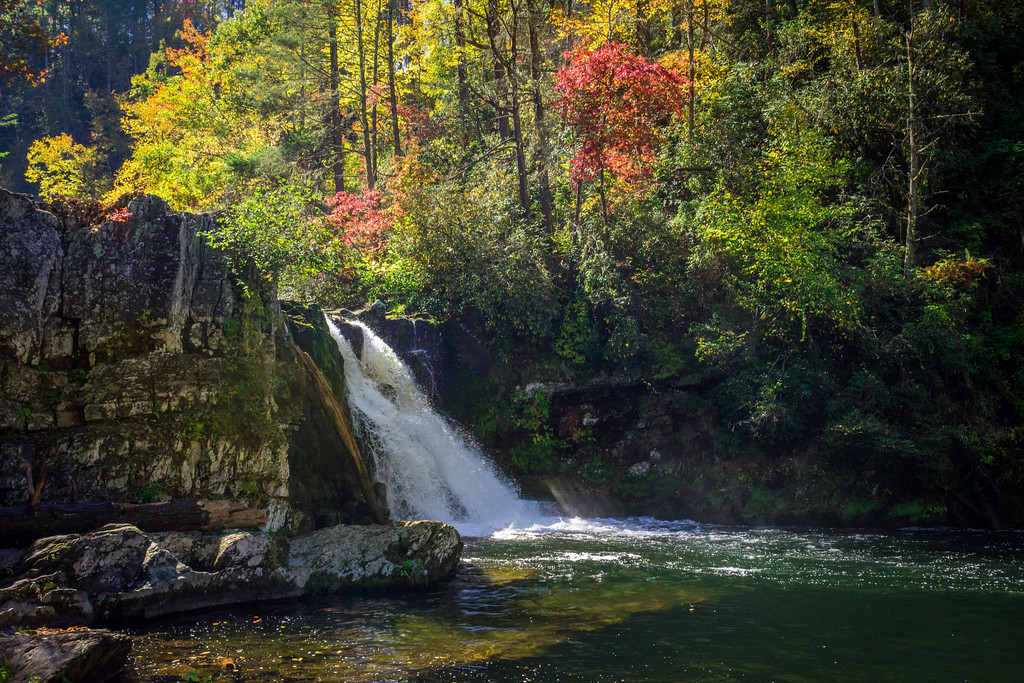 In spite of yesterday’s misadventures, we got an early start and headed to Cades Cove. We hiked to Abrams Falls at midday and returned to Elkmont for an early dinner and our biggest fire of the week.

Did We Catch It?

My very first thought this morning was, “Did we catch it?” Yesterday we discovered a mouse had moved into our car and probably intended to spend the winter there. Rather than enjoying a hike here in the Great Smoky Mountains, we spent most of the day rearranging and cleaning everything so we could protect our food and be able to tell if our little friend was still at large. Since he loved my hot dog buns, we used a piece to bait a sticky trap that I placed on the floor behind the driver seat.

I was up before dawn and decided to check the trap before I walked to the restroom. I opened the door AND…the trap was gone?!? What?!? I moved a few things around and found the trap lying behind the car jack under the seat…and the bait was completely gone. There were gnaw marks around the paper with a couple of turds inside, but no mouse. Argh! I tossed the trap and went back to the drawing board…

Our new and improved trap…bait in a bottle, with a sticky trap gauntlet around the neck (Photo by Becky)

Obviously this little guy was stronger and smarter than I realized! While I wanted him out of my car, I had to respect his resourcefulness. We had some empty 12-ounce bottles, so I stuck another chunk of the hot dog bun deep inside on of them, and stuck the opening into the sticky trap. Now he’ll have to get past the sticky trap twice, and he’ll have to risk getting stuck inside the bottle. I actually hope he does get stuck inside the bottle, because it’ll probably be easier to let him go. I wedged my new and improved trap underneath some stuff behind the seat and the waiting game began again…

As if battling a mouse living in our car wasn’t enough yesterday, Becky battled with a log she was cutting—and it drew blood. She was OK, but she got a cut inside her mouth when it whacked her teeth, and she had a small cut above her lip. When I saw it happen I thought it would be much worse—but it turned out that there were no teeth missing and no eyes put out. Before this and the ensuing hubbub occurred, we’d planned to get up before dawn this morning to beat the crowds to Cades Cove. This is our last full day here before we move on tomorrow to Cherokee National Forest.

Since we did get to bed early and Becky was doing OK last night, I checked to see if she thought she was still up to going now. She didn’t say much, because things still hurt quite a bit, but she was good to go. So we got on the road at about 7-7:30.

From everything I’ve read, Cades Cove is the stuff at Great Smoky Mountains National Park. I’ve seen a few pictures and read that there are animals and old farms to see, but I wasn’t sure I understood the draw of this part of the park thus far. I figured maybe I would after seeing it with my own eyes.

We pulled in not long after 8am and immediately began the Cades Cove Loop Road, which runs one-way for 11 miles around the area. It was pretty country, with forested hills to the north, mountains to the south, and lots of clearings in between. Some areas were pastured off for horses, and we stumbled across a few deer. Unfortunately I didn’t get any photos because I was driving. About a mile or two in, my curiosity took us down a road that turned out to be a cutoff to the other end of the loop…which led us back to where we started by Cades Cove Campground…whoops!

At the time I was fine with this, because we could take this opportunity to restock the ice in our cooler and eat some breakfast. While the prices are higher, concession operations at Cades Cove Campground are much more extensive than at Elkmont. The store here is big enough that you can actually walk into it, there’s a small eatery with ice cream and $5 hamburgers, and they offer bicycle rentals. I grabbed a bag of ice and drove us over to the nearby picnic area where we could dump the cooler.

Once the cooler was taken care of, I put together a turkey sandwich while Becky made a protein shake. I’m sure glad she brought her protein powder, because her mouth still hurt too much to chew anything. Her lip was pretty swollen, and her cut would bleed a little, but it was starting to heal up. After our peaceful little break, we got back on the road at close to 10am.

Gridlock, Thy Name Is Cades Cove

By now, however, hoards of people had arrived to bask in the splendor—and the gridlock—of Cades Cove. The speed limit on the hilly winding loop is 20 miles per hour, which seemed totally realistic an hour or so ago. Now things had slowed down to a 5 mile per hour crawl. Copious signs indicate that slow-moving and stopped traffic must pull off to let others pass, but few actually do. Most people looked over the age of 55, and drove like they had all the time in the world.

We did see more than brake lights and full-sized cars though. Besides spotting a few more deer, we saw a bear that had been tranquilized by park rangers. Alas, Becky was not yet up to driving, so I was unable to get any photos.

The traffic really killed the experience for me though. Most people drove like aimless wanderers, starting and stopping and slowing down for no apparent reason, not paying attention to the road, and completely oblivious to everyone else. I know I could have moved faster on a bicycle, but that too would have been terrifying because of all the absent-minded motorists. I really feel like the driving sucked any joy I might have felt over Cades Cove completely out of me. Some people may hate me for saying this, but I really hope that one day soon, Cades Cove will be restricted to shuttle buses, bicyclists, pedestrians, and horsedrawn carrages at the busiest times. I don’t think an 11-mile traffic jam should be a national park experience. My thought is that if you don’t enjoy traffic, and you can’t get to Cades Cove at the crack of dawn or during the off-season, don’t even bother with it—it’ll just suck the life out of you.

Abrams Falls Trailhead, on the far end of the Cades Cove Loop Road

Now we finally get to the good part of the day! After rounding the halfway point on the Cades Cove Loop Road, I told Becky there was a trailhead coming up where we could hike 5.2 miles to a waterfall. She was game, so we took the turnoff and found a spot in the gravel parking lot. We were still dressed for the chilly temperatures this morning, so we took off a few layers of clothing besides filling our water bottles and packing some trail mix for the hike.

The Abrams Falls Trail starts out around 1,700 feet, much lower than our hike from 5,000 feet at Newfound Gap two days ago. The trail doesn’t really gain elevation, but it does sink 600 feet or so by the time you reach the falls. The trail follows Abrams Creek, straggling some very rocky terrain. You’ll definitely want to wear a good pair of shoes for this hike. The trail rolls along at first, but then you go down and then back up two fairly strenuous hills before you go down a final hill that puts you by the falls. That last hill is a doozie on the way back, but the hike and the waterfall are worth it.

The trail crosses some very rugged terrain. At the top of one hill, you have to cross this notch in the rock to continue!

The trail offers a few vantage points high above Abrams Creek and the forest canopy.

Abrams Falls isn’t a tall waterfall at 20 feet, but the water volume going over is the largest in Great Smoky Mountains National Park. Currents in the pool here are quite strong as a result, and include an undertow. Plenty of signs warn that people have died because they decided to jump in for a swim. Due to today’s mild fall temperatures, everyone just relaxed among the boulders and trees. You can walk on top of some unlevel rocks to get closer to the falls, but the spray makes footing extremely slippery and hazardous.

Signs at the falls say 4 people have drowned…but the sign at the trailhead says 5! 😮
Don’t say they didn’t warn you!

After enjoying a good long rest and some trail mix, we made our way back to the car. As Cades Cove is popular, so is Abrams Falls. There were a lot of people on the trail and at the falls, but we didn’t find the crowds overbearing. Hikers here were mostly casual, but generally rather courteous. Even though the trip back was mostly uphill, for whatever reason it seemed to go by faster. We got back to the trailhead at 2:30, so the entire hike took us only three hours.

Back at the car, I checked our trap—still no mouse. He was in there though, as Becky found a couple of turds and a spot where he’d gnawed on the strings of her backpack. After hitting the restroom, we made our way through the rest of the Cades Cove Loop Road and headed back to Elkmont. It’s a shame we don’t know anyone who can find us a black rat snake…

Our Last Night at Elkmont

We got back to camp sometime after 4 o’clock and got our fire going again. We had an early dinner and just relaxed for the rest of the afternoon. I even took a nap.

Before it got completely dark, I chopped up some kindling for tomorrow’s breakfast fire. We had a ton of wood, so we built the biggest fire of the week for our last night at Elkmont Campground. When I got done roasting a couple of hot dogs, I made one last check of the mouse trap…still nothing. I swear I could hear faint squeaking somewhere inside the car though! Argh!

We got to bed nice and early on this peaceful evening…well, peaceful except for our new neighbors. I don’t understand why they allow RVs here on a tent loop—besides their dogs barking nonstop at everything, they have a giant light that floods the entire area. I just hope they turn it off so I can get a good night’s sleep…

As predicted, daytime weather has been perfect here this week, with the nights getting progressively warmer. Last night I was able to go without my stocking cap, and tonight it’s warm enough that I’m wearing one less layer overall.

Tomorrow, we pack up our site after four nights here. I plan to get up at first light to shoot panoramas of our campsite and the abandoned vacation cabins of Elkmont. Then, we’ll have breakfast and make our way to Indian Boundary Campground in Cherokee National Forest. And somewhere along the way, I hope we catch that mouse!