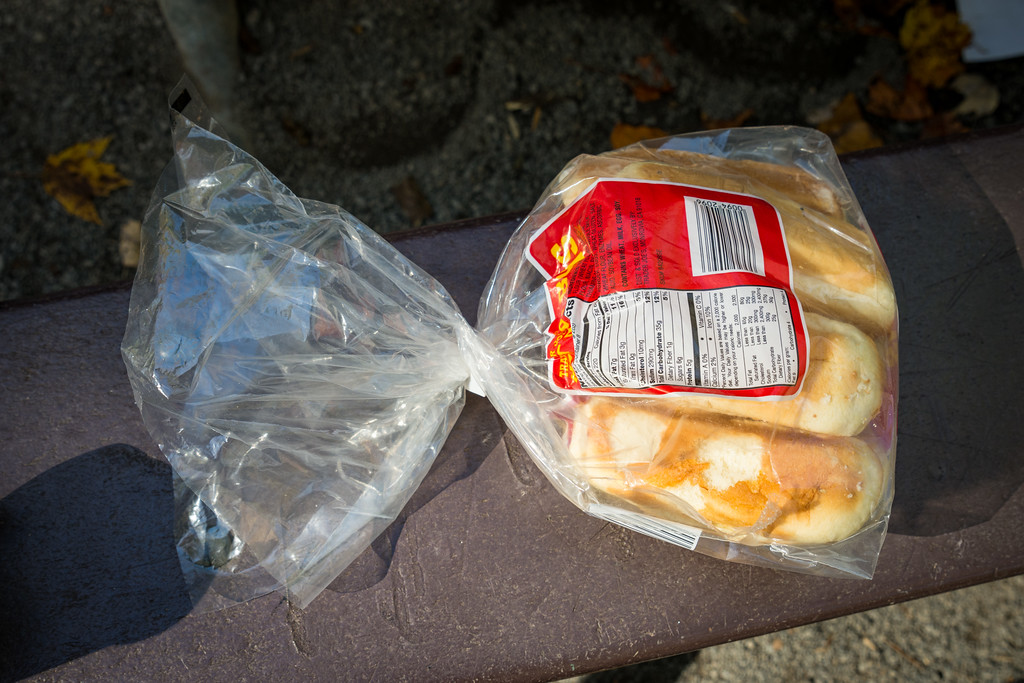 Nothing important happened today…because we now have a mouse living in our car…and Becky got hit in the face…it wasn’t me, I swear!

Thinking Back to Last Night

When I got up this morning, my first thought on the way to the restroom was to get a fire going to cook up some hot dogs for breakfast. This was simple enough…until I started rummaging through the car to gather up some buns and condiments…and then I recalled a couple of things from last night…

It was well after dark when we got back from our hike yesterday. While we prepared dinner, Becky drew my attention to a ragged paper towel lying in the back of the car. She thought it looked like an animal did it and suggested that we may have a mouse. I was too tired and didn’t even want to consider the possibility, so I blew it off. Another thing I remembered was that a couple of my hot dog buns looked like a chunk had fallen off, but I was tired and it was super dark—so I blew that off too. Either way, we ate dinner, packed up the car, and everything seemed totally fine…

Well, this morning I knew that Becky was right…my hot dog buns were obviously compromised (and I ate some last night, ewww!!!) and now that I knew to look, I’d found what were probably mouse droppings. Uggghhh. Not good!

A mouse was living in our car, and dug around in the foam under the seat!

Right away, we began taking things out for inspection. Our breakfast fire was burning well right now and I was too hungry and frustrated to be all that useful. So Becky told me to roast a couple of hot dogs and eat them (sans bun, obviously) while she continued with the car. There were signs that the mouse had been all over our stuff in the back, but thankfully our utensils were all packed into hard cases and the only food he got into was my hot dog buns. He also dug quite a bit into the foam on the bottom of the driver seat, probably looking to make a nest.

Normally the hot dog buns would have been packed into another hard-sided tub like the utensils, but Becky had packed the costumes she’d made for Saturday’s Star Wars party in it instead. We bought most of our groceries for the week in Knoxville on the way to the park, and since the food tub was already occupied, the non-refrigerated stuff just sat in a grocery bag. Since mice are often looking for warm places to winter, and are constantly looking for food, our car had to look like the jackpot to our furry little friend.

Even after turning the car upside down (and banging on the driver seat in case he’d made a nest inside), we figured he was hiding safely in any number of nooks and crannies we didn’t know about. This mouse was going to continue making a mess of our car if we didn’t get him out, and the only way that was going to happen was if we trapped him. I sat down to think and make a list…

The Plan – To Catch a Mouse

When I explained all of this to Becky, she said that she would clean and keep watch over everything while I went into Gatlinburg. This made me a little nervous because food sitting out could attract bears, and people could snatch my expensive photo gear if Becky had to use the restroom. I didn’t see a better way though. I told Becky that it would take me at least two hours, and probably closer to three because of traffic inside the park and in Gatlinburg.

So off I went into town to find a car wash and a grocery store. Traffic getting to Newfound Gap Road was a little better than the day before, but I knew the worst part would be crossing through Gatlinburg. In town, the innumerable crosswalks with confused pedestrians and Sunday drivers made Manhattan and the Sunset Strip look like easy places to drive. Most people looked like they were retirement age, and for some reason they all seemed impressed with the smorgasbord of national chain restaurants and retailers you could find at almost any mall in the country.

About 45 minutes after I left, I finally made my way to the fringe of town and the only car wash that came up on Google Maps, the 73 Car Wash. It looked like it was built in the 1950s or 60s and hadn’t been updated or maintained much since. After dodging some gaping potholes, I pulled up alongside a vacuum cleaner that hopefully worked and began removing the mats and spare tire from the car. I spent a good 30 minutes very thoroughly cleaning everything out and putting it back together. It was spotless now, so it will be much easier to detect any new mouse droppings.

Next, I went down the street to Food City. They had the classic spring-loaded mouse traps, but I wasn’t sure they’d be all that practical inside our tightly-packed car. I’d never used the sticky traps, but they seemed like the best option. I bought a pack to give them a try. I also picked up a 6-pack sampler of local beers and some new hot dog buns while I was there.

Now I just had to make it through the tourist traps to get my mouse traps back to Elkmont…I took several side streets that skirted the downtown area until I could no longer avoid it. I don’t know if it was faster, but it definitely saved my nerves, and I felt like there was less chance of an accident.

I returned to Elkmont before three hours passed, and found Becky sitting contentedly reading a book. She was relieved to see me and helped to repack the car. Since we knew that this mouse likes my hot dog buns, we saved one from the bag he’d already gotten into and used a piece to bait our trap.

Jakes Creek, which runs through Elkmont Campground and behind the old village of Elkmont (Photo by Becky)

We were back in control of our life again! It was too late to go anywhere before we ran out of daylight however, so we started a fire and cooked up an early dinner. Afterward, Becky and I took a walk to explore Elkmont and find some more wood. I showed her the cemetery I discovered yesterday, and some houses that have been abandoned for at least several years. Signs indicated that this was the Elkmont Historic District, and that the houses were vacation cabins that were built here before the creation of Great Smoky Mountains National Park. It was a mystery to me why these cabins weren’t converted into worker housing or guest lodging, or even just demolished. (Learn more about this on Day 6.)

As sunset approached, we foraged for some more firewood. When the nights are cold, it’s good to have extra so you can have a nice big warm fire. We cut a few long pieces and brought them back to camp. When we got to our site, I really needed to hit the restroom. Normally Becky leaves the work of cutting and splitting wood to me, but she wanted to get it started while I was gone.

We gathered lots of wood together at Yellowstone and Grand Teton and we’ve been building campfires for years, but I never realized that I did all of the cutting and splitting because I rather enjoy it. It hadn’t occurred to me that this was Becky’s first time cutting wood on her own. I never gave it a second thought because I know she’s perfectly capable. But as I moseyed back to camp, I saw Becky doing something a bit unorthodox.

The far corner of our campsite has a wooden retaining wall that keeps our whole site level since our loop was designed for tent camping. Becky had a long log, about four inches in diameter, resting diagonally with one end on the retaining wall and the other end on the ground at the bottom next to it. She positioned her foot on the small section she’d cut to try to snap it off, but it was too thick. I wasn’t sure if I needed to say anything, but I’ve learned the hard way that even working with a small piece of wood can really get you hurt. Just as I opened my mouth to recommend she cut on it some more, she stomped on it as hard as she could, and WHACK!!! The log snapped in two, and in the process the long end hit her solidly on one side of her face!

My mosey turned into a sprint, as I envisioned my wife with one eye, a broken nose, or a split lip. I grabbed paper towels from the car as there was a lot of blood. I asked about her eye and she said it was fine—so the worst hadn’t happened! When the bleeding subsided I took a look under the towels…all she had was an incision over her lip about a quarter of an inch long. WHEW! So she was probably OK, as the cut wasn’t lacerated or even very big.

We still weren’t sure what to do though…the sun was down and it was getting cold. Neither of us knew either way if she should go to the hospital to have it looked at. She had a second, similar cut inside her mouth too, but all of the bleeding was under control. Things still hurt, but ice was helping with the swelling.

We decided to go up to the camp office and see if anyone was there doing paperwork after closing time. No dice. Lights were on at the camp hosts’ RV nearby, so we knocked on the door there. This was a lot less awkward than it would have been, had I not met and befriended Caroline yesterday when I checked us in at the camp office. Becky felt stupid and embarrassed, but really wanted a ranger to come and take a look at things. Caroline kindly went inside to grab her walkie and a jacket so she could radio a ranger and stand outside with us.

Greg the ranger arrived several minutes later and said that Becky looked fine. Since things had calmed down and he was friendly, I asked what rangers do about mice jumping into their vehicles this time of year. He said that they just find a black rat snake—mice will want to stay inside all winter, while the snake will hunt the mouse and then leave on its own. Hahaha I don’t think that he was joking! Just then, Greg got a call about a bear and had to leave…

By now it was pretty late, but all of the excitement had us much too wired to fall asleep. After helping Becky get an appropriate band-aid from our first aid kit, I finished cutting up the wood and got a big hot fire going. Becky hoped to hold her wound together properly enough that it would heal up without scarring.

We stayed up and sat by the fire reflecting on our insane day…finding out we had a mouse in our car, cleaning out the car, Becky hitting herself in the face with a log, and finally us finding the camp host and the ranger. We had no idea what we were going to be able to do tomorrow…since tomorrow is our last full day here, I hoped we could still get up early and go to Cades Cove…but I don’t know if Becky will be able to do that. I checked the mouse trap before we went to bed at around 10-11 o’clock, but nothing so far. I sure hoped we caught him by morning, and I hoped Becky would be OK too!