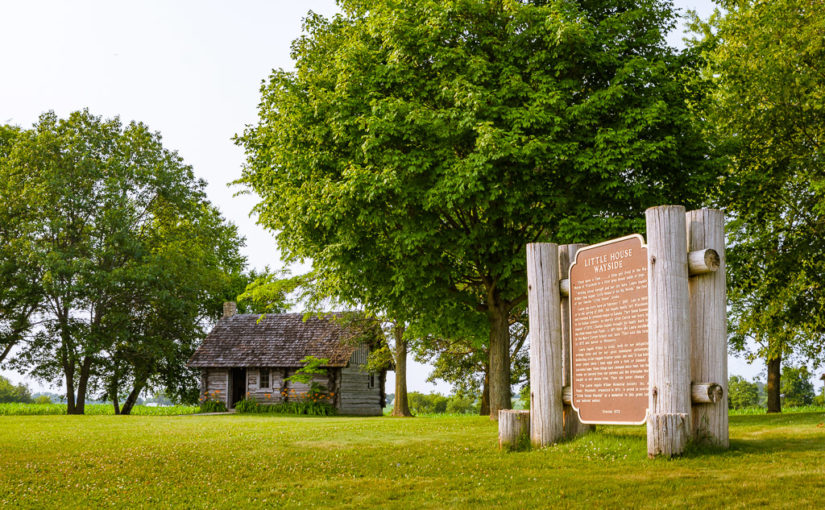 We drove from Motel 6 in Janesville to Pepin, Wisconsin, a village on the Mississippi River. Laura Ingalls Wilder’s book, Little House in the Big Woods takes place here, where she lived as a small child seven miles outside of town.

Today we got a much later start than I had hoped, but it seems like everything somehow worked out.

We left the Motel 6 in Janesville (they left the light on for us, but we turned it off before we left) right around 11am and headed north (or west…whatever) on I-90 past Madison and Wisconsin Dells on up to the Mississippi River.

The Driftless Area of Wisconsin

We were really impressed with the gorgeous rolling hills around Madison and on up through Wisconsin Dells. Everything everywhere was just wonderfully green and lush, and everyplace seemed very well-manicured and maintained, which is wonderful to see. Lots of times you would see modern industrial and commercial buildings, and sure enough, behind it would be a farm—something that is novel for me to see right next to suburban buildings.

Now once we got further north, the flora seemed to change to having more conifers in the mix and things weren’t quite a lush green anymore—they were more of a California or Rocky Mountain green, but not quite that color. It also got hazier and hazier, and that was likely because smoke was blowing in from forest fires burning all the way up in Canada. What was also strange was that there were huge valleys that would open up, and lots of times you’d even see small mountains that were too small to be considered officially mountains—maybe we could call them “dwarf mountains“. You’d see naked rocks that looked as old as time standing in the middle of a bunch of trees next to the freeway too…something else that I never associated with Wisconsin or Minnesota.

Jacksonville Pass, looking west near the 36-mile marker on I-90 in Wisconsin

King’s & Queen’s Bluff from US-61 as it winds along the Mississippi River north of I-90 near Winona, Minnesota.

Eventually we passed LaCrosse and went over the Mississippi River into Minnesota on I-90 and US-61, which parallels the Mississippi. US-61 actually follows the Great River all the way into Minneapolis, and there are busy railroads on both sides of the river carrying trains. Many of the trains heading south are all tanker cars, probably full of North Dakota crude oil bound for refineries in Louisiana. All along the river there were heavily-wooded bluffs with dwarf mountains, knolls, knobs, and rock outcroppings breaking up the trees.

We crossed back into Wisconsin at Wabasha on MN-60/WI-25 to go to Pepin.  This is where Laura Ingalls Wilder was born and lived as a little girl, and where she got inspiration to write Little House in the Big Woods. They have a museum there, and about 7 miles out of town there’s a replica log cabin. Pepin from WI-35 seems unremarkable in town, with a few little stores you’d see anywhere else, and a little motel with a campground where we stayed. The biggest attraction on the main street was the Laura Ingalls Wilder Museum. Admission is only $5 and they have plenty of artifacts from the era when Laura and her family lived in Pepin Township, including cook stoves, clothing, tools, a covered wagon, and canoes used to fish on Lake Pepin.

Dolls like Laura’s in Little House in the Big Woods. Her first doll, Susan, couldn’t help that she was a corn cob.

We met Dawn there, along with her mom, Mary, who just retired as the village clerk and was now planning to devote much more time to her position on the board of trustees for the historical society that runs the museum. They just expanded from a small building into two much larger buildings, and were in the midst of reorganizing and remodeling to improve their exhibits. All throughout the museum were artifacts, either with stories behind how they were used by the family, or with quotes from Little House in the Big Woods pointing out where Laura referred to them. There’s a video presentation on the history of Laura’s family in Pepin, along with other history of the area. Mary showed us on a big map from 1877 which lot Charles Ingalls had bought with his brother-in-law near the edge of Pepin Township. She explained how they found the information years ago by putting the word out for property owners to check their title abstracts for Charles Ingalls. She also shared the story of how she and the historical society worked to get grants and raise money for the museum to build a replica log cabin on the site of the old Ingalls farm at a wayside.  (In Wisconsin, small roadside parks along highways that we would call rest areas in Ohio are called “waysides”.)

A farm along County Road CC

We followed County Road CC out to the Little House Wayside Cabin, built in 1978 just a few hundred feet from where Charles & Caroline Ingalls started their family. The countryside round about the town was incredible! Beautiful farms and woods were all along the winding highway. We saw several farms that looked like they belonged on postcards.

360-degree panorama at the Little House Wayside. Click and drag to look around. Click the top right button to go full-screen.

Little House Wayside, with a replica cabin and a Wisconsin historical marker on the very land where Laura lived

After we pitched our tent as fast as we could, we went down to the lakefront in Pepin to meet our sailboat captain, where we had booked a sunset cruise on Lake Pepin.  (We were behind the eight ball most of the day since we got started many hours later than we’d planned—but I had to let Becky sleep in since it was her first day off work!)

While the state highway passes through a rather unremarkable part of Pepin, the street along the water shows how magnificent Pepin really is! Besides the huge marina and small beach, there are lots of old buildings running along the waterfront street with restaurants, bars, art galleries, and shops, all with a really laid back vibe that you’d expect to find on the New England coast. As a tourist destination, I would say that Pepin is highly underrated. The village is not what it appears to be from the state highway, and there are tons of things to do here.

Dave was our captain that night, and he owned a wine bar that was attached to his house along with his company, Sail Pepin. He has two sailboats and three other captains who work for him, taking people out on Lake Pepin for about 2-3 hours at a time. We had five others on the cruise with us who were all from Minneapolis, Rob & Barb with her son Ben & his wife Lori, along with Dave’s friend Maria. The folks from Minneapolis were all staying at their weekend place on a farm outside of Pepin. They were extremely friendly, and Dave was an exceptional host!

Our captain, Dave, from Sail Pepin

Dave had an encyclopedic knowledge of sailing, explaining the telltales or tattletales that indicated wind direction, why nautical miles are called knots, why nautical miles are longer than a statute mile, how to detect shifts in the wind by looking at the water, and how air pressures fluctuate with the setting of the sun and the cooling of the land on either side of the lake. Since this was my first time sailing, I was surprised at how many of the terms are used in everyday life and we landlubbers don’t even realize the connection.

Becky drives the sailboat, while Maria sits in the background.

Sailing was a much cooler experience than I’d expected! Almost right after we left Pepin Marina, Dave had Lori drive the boat. Just about everyone took a turn driving over the course of three hours, including Becky and I, and let me tell you it is exhilarating! We got the boat up to about 5 knots or so at most, and Dave said he’d had it up to 8 knots in 40mph winds. The weather was absolutely perfect, with a comfortable temperature and great wind for sailing. The sun set at the end of lake, although it appeared as just an orange circle due to all the forest fire smoke. Barb told us that sunsets on Lake Pepin are usually a spectacular array of colors, but she enjoyed it tonight just because it was a new experience to see the color gradients on the sky.

While we were sailing the lake, besides other boats, we saw an ultralight glider that was outfitted for takeoff and landing in the water. Dave was excited to get a closer look, as were we all…so we stayed out a little longer since Dave used power to catch up to the glider. He also pulled us right up alongside a barge that passed through. Besides all the people and their machines, we saw copious numbers of bald eagles soaring over the lake, a common sight here. At dusk, we started seeing different flying creatures…bats…flying along just over the surface swooping to catch mosquitoes and other insects for an early snack.

We pulled into the marina again near the end of the Blue Hour. It was an incredible experience that I would do again in a heartbeat, and it was super special because of Dave, who was a great captain and a skilled conversationalist.

Looking out across the bough over Lake Pepin as the sun begins to set.
Previous Post: Day 1 – Our Adventure Begins in Wisconsin
Next Post: Day 3 – On the Banks of Plum Creek & Little Tent on the Prairie